Your brain actually remodels as you learn!

If you knew that you could rewire and expand certain parts of the brain by learning, wouldn’t you want to do more of it?

Well, now it’s official. The brain really does rewire and alter its function as we learn and become expert in a subject. Research using fMRI (Functional magnetic resonance imaging) found that the brain changes as we learn something new. fMRI measures brain activity by detecting changes associated with blood flow. This technique relies on the fact that cerebral blood flow and neuronal activation are coupled. When an area of the brain is in use, blood flow to that region also increases. 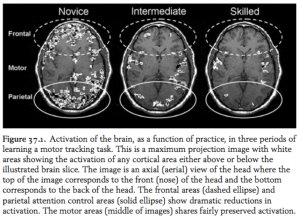 The research showed that brain activity increases as we learn, however, once we have learned a new skill and become expert in that area, brain activity reduces. At first this might appear a little odd; however, the most significant amount of activity is required during learning as new neural connections are created during rewiring, which requires increased blood flow. Once the new connections are made then, remodeling can reduce. The new connections need to be maintained with revision otherwise the new links will wither.

The adage that humans only use a tiny percentage of their brains is almost undoubtedly true.

The brain is like a muscle and needs to be exercised to stay healthy, current and responsive. Your brain has a massive capacity to learn, and this not only maintains brain health but also learning can make you far more successful in life. Many of the most successful entrepreneurs and sports people read a lot, and actively increase their knowledge and expertise in their subject.

The research suggests that once a new skill has been learned and brain activity reduces as you become an expert in that particular area, that you should either learn a new skill or advance the one you are already expert in. As you learn something, your brain wires more specialized circuitry for solving the problem with less effort. Using less of your brain is an advantage since that is more efficient.

This also explains why concentration is so necessary for learning. When the subjects started learning the frontal and parietal cortices, believed to be involved in the control of attention and planning, are considerably more active. After reaching proficiency in the skill, however, this additional activation goes down significantly.

Blumenfeld-Katzie et al. (2011) reported structural changes in the brain of rats after training in a Morris water maze that was observed by MRI and confirmed by histology. Microscopic analysis showed statistically significant differences in neurons, glia, and myelin proteins consistent with changes detected by MRI in the appropriate brain regions.

Research has also shown that the brain changes after learning to read and play music. The study by Stewart et al. (2003) found that musically naïve participants scanned before and after 15-weeks of learning had increased brain activity and remodeling in the parietal cortex of the brain.

A study by Vivar and Praag (2017) suggests that running increases the size of the hippocampus, a part of the brain responsible for memory. Also, that running has a positive effect on the neurotransmitter system increasing glutamate and acetylcholine in the production of new brain cells in the adult brain.

In summary, if you wish to maintain a sharp, healthy brain that can continue to develop and change, as you get older then read more books, learn new skills and retain what you already know by revising your current knowledge. Even better still exercise or run at least twice a week for 20-minutes and not only will you ward-off so many illnesses but the chemical balance in your body will be so much better, and you will feel more positive and happier.

NOTE FROM ME: Was this information new to you and has it made you want to learn more? YOU CAN MESSAGE ME HERE: or email clifton@sub-4.co.uk