My superfood series: 6. Manuka Honey – what is all the fuss about? 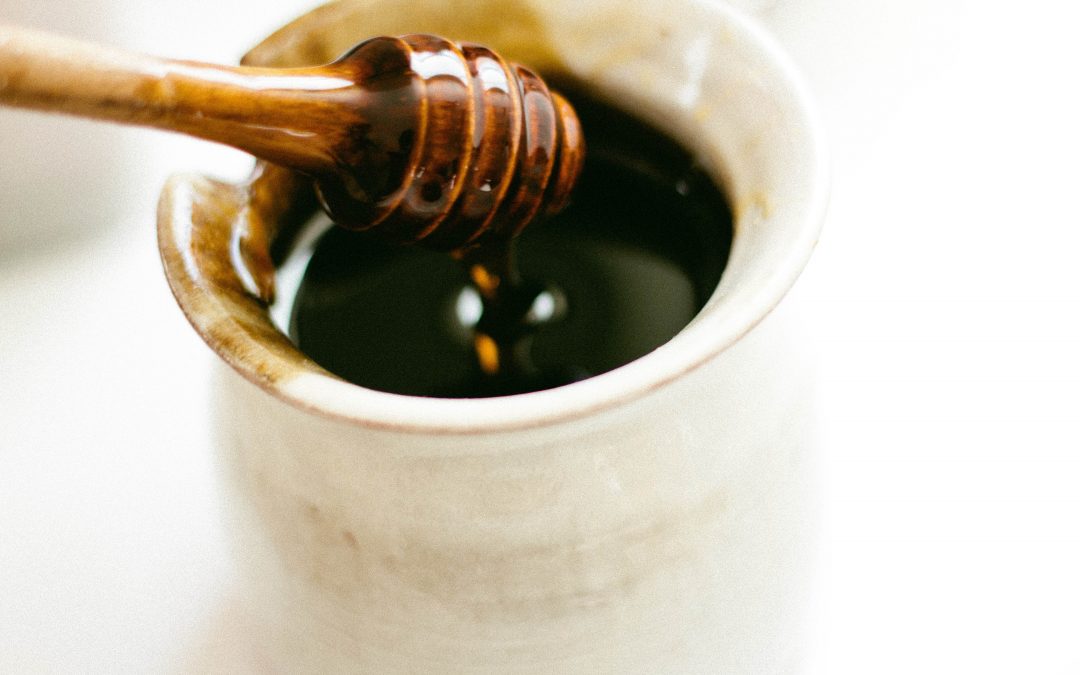 Why are so many people talking about Manuka honey’s and what is it?

Since I started my quest to investigate the so-called ‘superfoods’ for the benefit of my own health and fitness and that of my clients, I have heard about Manuka honey, and it’s “amazing” health claims many times. Is there any actual ‘fire’ where the ‘smoke’ is coming from or is it merely no better than regular honey?

A special kind of bee!

So, with my investigative researcher head on I went down to my local health food shop in Leek, Staffordshire Moorlands to ask the manager. I asked her “why is everybody so excited about this expensive commodity produced from one particular bee and tree (European honey bees – ‘Apis mellifera‘ foraging on the manuka or tea tree – ‘Leptospermum scoparium‘)?

She – a lovely lady got rather excited as she explained the antibacterial and healing properties, but also how much profit they were making from sales. On-line it sells for as much as £69.99 for a 250g pot of Pure Gold – appropriate brand name !!!). This price was for the tested 850+ mg/kg MGO. I’ll come back to this later.

Manuka honey is produced from the nectar of the manuka tree, found uncultivated in New Zealand and southeastern Australia. The word manuka is from the Maori language meaning bush or tree (Leptospermum scoparium). Manuka honey is markedly viscous. This property is due to the presence of a protein or colloid and is its main visually defining character, along with its typical dark cream to dark brown colour.[1]

What makes Manuka honey unique is that it must be independently tested and pass the Manuka Honey Science Definition test as specified by the Ministry for Primary Industries (MPI), before being exported from New Zealand. The test comprises five attributes. Four (4) are chemical, and one (1) is DNA Leptospermum scoparium.[2] The honey must pass all five tests to be labelled as manuka. This testing came into effect on 5 January 2018.[3]

What does the research say?

While components in manuka honey are studied for their potential antibacterial properties in vitro,[4] scientists are starting to get excited about its potential benefits, especially since traditional antibiotics are beginning to fail due to bacterial resistance. The issue is that there is no conclusive evidence available yet for use on humans. There is, however, preliminary research for its potential antibacterial properties and synergistic therapy with topical antibiotics.[4] Methylglyoxal (MGO), a component of manuka honey, is under study for its possible activity against E. coli and S. aureus.[5] Manuka honey does not reduce the risk of infection following treatment for ingrown toenails.[6]

Manuka is so good for you because it contains certain types of the enzyme that create a type of hydrogen peroxide or naturally occurring phenols that have a range of health benefits, including rebalancing the harmful bacteria in your gut.

Methylglyoxal (MGO) on the packaging. What does it mean to us?

MGO is naturally occurring methylglyoxal, sometimes referred to as MG. Most genuine high-grade manuka honey from New Zealand includes a UMF (Unique Manuka Factor) rating on the label. Some honey producers instead use an MG or MGO rating. Honey without a UMF or MG/MGO rating is generally low-grade honey without the beneficial characteristics that have made premium manuka honey so much in demand.

NPA stands for non-peroxide activity, the property that makes certain grades of UMF and MGO manuka honey special. Those manuka honey that carries only a ‘total activity’ or ‘peroxide activity’ rating does not have this unique NPA property and should be considered low-grade honey.
UMF ratings are based on specific natural markers characteristic of manuka honey, such as methylglyoxal. UMF ratings correspond to the potency of the desirable NPA properties of honey. Typically honey with NPA between 5 and 9.9 are labelled UMF 5+, honey with NPA ratings between 10.0 and 14.9 are rated UMF 10+, and so on.

Use this table to convert between manuka honey UMF, MGO and NPA ratings. 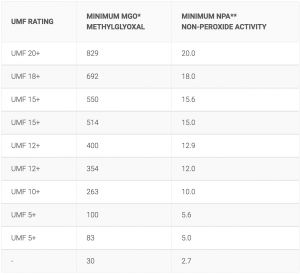 Raw honey is the unpasteurised version of commonly used honey and only differs in its filtration. Pasteurised honey simply extends its shelf life. A tablespoon of raw honey contains 64 calories, is fat-free, cholesterol-free, and sodium-free, says the National Honey Board. Its composition is roughly 80 per cent carbohydrates, 18 per cent water, and two per cent vitamins, minerals, and amino acids.

Do I think it works? Yes! It’s been used for thousands of years and humans eventually work things out over time. The science is merely used to confirm things we believe to be correct or otherwise. Manuka honey is more nutrient dense and for me, I prefer the darker more viscous manuka honey for its potential health benefits, and the evidence is started to trickle through now about its antibacterial benefits when consumed. More research is needed, and my instincts are that eventually once the dust settles, it will be found to be beneficial as a health supplement and may even be a robust medicinal alternative to some traditional medicine.

As with all these superfoods, there are two other powerful factors I want you to consider. Firstly, they are natural and unprocessed and this modern world of mass food production where volume is king and quality an irritant to producers, nature got it right with natural honey. Consume more natural, healthy simple, unprocessed foods. It will be more healthy in the longer-term. Secondly, and for me most importantly, the power of your belief and mindfulness over your body is stronger than you think. If you believe it works for you personally and it makes you feel happy and positive – the ‘happy’ neurotransmitters in your brain will raise your mood, improve your character and have a positive synergistic effect on your health. The power of positive thought is incredible.
I would also recommend no more than one tablespoon per day, or divided into two teaspoons per day, as a sweetener or on your cereal as I do.

As a result of the high premium paid for manuka honey, an increasing number of products now labelled as such worldwide are counterfeit or adulterated.

In governmental agency tests in the UK between 2011 and 2013, a majority of manuka-labelled honey sampled lacked the non-peroxide anti-microbial activity of manuka honey. Likewise, of 73 samples tested by UMFHA in Britain, China and Singapore in 2012-13, 43 tested negative. Separate UMFHA tests in Hong Kong found that 14 out of 56 manuka honey sampled had been adulterated with syrup. In 2013, the UK Food Standards Agency asked trading standards authorities to alert manuka honey vendors to the need for legal compliance.
Typically, honey is sweet but can be cruel to infants. Spores of Clostridium botulinum bacteria — found in dirt and dust, which can contaminate honey — may lead to infant botulism and produce a toxin inside the body that can cause muscle weakness and breathing problems. The Mayo Clinic recommends waiting until after 12 months of age to give infants honey; consumption is safe for older adults and kids since they have a mature digestive system that can handle the spores.

Very interesting video. Thank you for reading my blog and if you haven’t already please subscribe to receive more powerful information for your mind and health.